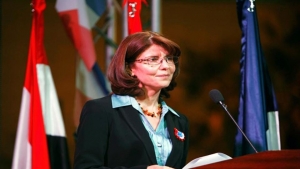 The award honour Begikhani’s creative and academic work on gender equality in the past two decades in Britain and Kurdistan.

“Women in different parts of Kurdistan have been combating on the frontline against social and political oppression, at home, inside their communities and in the battlefield. Also, they have been actively involved in the fight against the ISIS.” Beigikhani told K24 in an email.

“These are indicators of a progressive gender politics in Kurdistan, however, the integration of gender equality in everyday life is still highly contested. What is more, due to endemic division among the Kurds, Kurdish women's struggle carries historic specificity in terms of political and social development. If women in Kurdistan can go beyond their political, clan/organisational, class and geographical differences and get together around common values, they would become the hope, leading the whole nation towards liberation and freedom,” she added.

Begikhani has won several other prizes in the past, including UK’s Emma Humphry’s Memoral Prize for her writings and activities against honour crimes (2000), Kurdistan’s Sayd Ibrahim Prize for her life time achievement (2009), and French Feminine Poetry Prize Simone Landrey for her poetry collection “Le lendmain d’hier” (2012).

“Women on the Frontline: Between Victimhood, Representation, Political Participation and the Fight Against Terrorism’’ was the theme of a successful women’s conference at the Galawêj Festival in Sulaimani that Beigikhani chaired last week.

“This is a shift in the Kurdish collective mentality and a sign of progress leading to freedom, gender equality, and social justice inside Kurdish communities. Kurdistan’s women have done a lot this far, but we have still a long way to go,” Begikhani said in a statement to the media.

She thanked the Galwêj Festival Committee and considered the prize as “recognition of Kurdish women’s struggles against social and political oppressions while they have been fighting terrorism and ISIS jihadists in the Middle East.”

Talaat Taher, from the Galawêj Festival Committee, said that “from now on, the Kurdistan Gender Prize will be given to influential personalities like Dr Begikhani, who have had a great positive impact on our society.