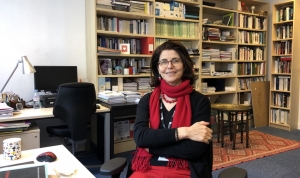 Nazand Begikhani, Senior Research Fellow at the University of Bristol, is visiting Professor at Sciences Po’s Centre for International Studies (CERI) for Spring semester 2020. She has been awarded the Vincent Wright Chair that promotes academic exchanges between France and Britain. She tells us about her role as a British researcher of Kurdish origin working on gender-based violence and shares her experiences as a poetess and human-rights advocate.

Your main research topic is sexual and gender-based violence. Can you tell us more?

Researching gender-based violence is part of my feminist resistance strategy against inequality and injustice. Through research, I seek to contribute to the creation of a feminist analytical theory based on lived experiences of women who have been subjected to different forms of gendered violence. My approach is to criticise the status quo, to produce evidence-based knowledge and to counter the mainstream discourse in the field of social sciences, across various disciplines. Research is the process of producing knowledge and we know that knowledge is not neutral nor abstract; knowledge is power, as Michel Foucault said, and it has a strong impact on our reality.

This process of knowledge production has empowered me personally, providing me with methodological and theoretical tools to engage both academically as well as politically, and to make a difference in my surrounding world. For example research-based knowledge has enabled me to address social policy and to integrate the concept of gender in the field of higher education in post-conflict Iraq, especially in the Kurdistan Region. One of the main outcomes of this process has been the establishment of Gender Studies centres across universities in the Kurdistan Region.

Working in war-zones and among war-torn populations — which is the topic of my course at Sciences Po — , has been very challenging methodologically as well as politically, and research-based knowledge has helped me to overcome these challenges.

What drove you to this field of research?

My reading of Michel Foucault has driven me to engage in the process of discourse creation, and feminist literature opened my eyes and taught me how to critically engage and explore the hidden experiences of marginalised women based on their gender, race, ethnicity, religion, social status, etc. I should also add that my personal experience, enshrined in forced displacement, dislocation and resistance, combined with the experiences of women around me, has motivated me to work on sexual and gender-based violence.

In addition, specialising in gender studies and investigating sexual and gender-based violence, has allowed me to look into gendered experiences of violence inside different communities across different geographical areas. I have looked at how ethnicity, race, nationalism, religion, class, and geographical location are intertwined and create an intersectional reality, where women are caught up in, and faced with, different systems of oppression. This intersectional complexity has been the subject of a rich debate amongst feminist scholars and it is fascinating to be part of this discourse, trying to work through differences, with the aim of promoting a common humanity in our divisive world.

What I teach at Sciences Po, both at the Undergraduate College and at the Graduate School of International Affairs, is inscribed in all that: the specific topic of gender-based violence in war zones is an extension of a particular research project I conducted with two colleagues, Emma Williamson and Nadia Aghtaie, at the University of Bristol, that allowed us to explore the different forms of discrimination and oppression to which refugee and displaced women, and also men, are subjected in the camps in Iraq, and how these have been reproduced in different ways in the UK.

You are also an active Human Rights Advocate. What is driving your engagement?

Fundamentally, it is my nation’s history of resistance against state oppression that has inspired me to engage personally in advocacy for freedom and human rights. And paradoxically, when as a feminist I protested against the structure of male domination and spoke out against patriarchal oppression, I was criticised and ostracised by conservative members of my own community. You know, this dilemma among people who fight for their national freedom and independence: “The Nation first… and then we’ll get round to Women’s Liberation”. But Kurds generally have a great appreciation for knowledge, so my research activities became both a methodological and discursive means through which I learned to nuance my argument, and to approach women’s rights through a human rights perspective, which has a more effective impact.

So, of course, this personal experience inspired me to embody resistance. I exist because I resist. I come from a family with a strong backbone of resilience and resistance: this is not only part of the Kurdish peoples’ identity, but very much associated with the struggle of Kurdish women. And I believe that we can resist in different ways: some women take up arms and combat ISIS jihadists, some fight against the Turkish state or the Iranian regime. For my part, in addition to my feminist activism, I chose to resist by picking up my pen. This is what led me to become who I am now.

Why did you choose poetry as another means of expression?

I began writing poetry as a teenage girl. Poetry is my truth: through poetry you can come face to face with yourself, it is very intimate and has really allowed me to be myself.

Based on my experience, I can say that conducting academic research is much easier than writing and publishing poetry. How? As a researcher, you are equipped with methodological tools helping you explore concrete reality and produce fact-based data which, through theoretical explanations, you analyse and restructure in the form of an academic paper or a book. Poetry is different: there are no theories nor set methods; you are alone facing your inner self, digging deep into your intuition and emotional intelligence in order to produce something that is intimately and truthfully you. This poetic relationship with the self and this personal vision of reality is an existential experience and can be very challenging.

Also, poetry is the first form of writing, I think Octavio Paz said that. Human beings started to relate to each other and to their world through artistic and poetic expression. I should say that I have used poetry also for academic purposes; my research led me to use poetic expression to explore gendered experiences of violence by refugees and displaced persons in the refugee camps. It is fascinating to see how powerful poetry - and other art forms - can be in articulating buried feelings and painful experiences by producing beautiful pieces of writing and poetic imagery, leading to recovery as well as healing.

You have been awarded the Vincent Wright Chair. Why were you interested in engaging in an exchange with a French research university?

Actually, I was sent the announcement of the Vincent Wright Chair by my colleagues at the University of Bristol. I had lived in France, studied at the Sorbonne, I speak French: I think my colleagues wanted me to explore this possibility. I must say that when I first read it, I was not sure I could feel in the right place at Sciences Po, considering my research subject. But when I went through the website and found out about the activities of PRESAGE, Sciences Po’s Gender Studies Programme, things started to click. I found PRESAGE as a platform through which I could contribute to Sciences Po’s teaching and knowledge production on sexual and gender-based violence. I am now here and involved in teaching, public debates and conferences and I’m very much looking forward to exchanging further experiences, ideas and maybe also developing joint research!

The essence of the Vincent Wright Chair is about developing scientific cooperation through comparative approaches. The Chair has provided me with a fantastic opportunity to bring in the concept of sexual and gender-based violence in war zones and I am looking forward to exploring further these timely and pressing issues from a comparative perspective.